My essay ‘Words from the New World: Adventure and Memory in Patti Smith’s Late Voice’ has been published in the book Patti Smith: Outside, edited by Claude Chastagner (Presses Universitaires de la Méditerranée, 2015).

ABSTRACT: Patti Smith’s late work is invariably connected by critics and fans to the work of her ‘classic’ era (the 1970s punk scene) and the extent to which recent work lives up to, develops or exceeds that on which the artist’s reputation was based. Smith herself has been no stranger to such memory work, via her involvement in biographical projects such as her book Just Kids and the film Dream of Life. Her musical output since the 1990s has been characterized by memory work, not least in a number of pieces written in response to the passing of friends and family. Yet this work is complemented by an embrace of new beginnings and adventure, often achieved by returning to places, themes and styles Smith has explored before but looking for fresh angles and new perspectives. This essay explores the dynamic of adventure and memory via analysis of Smith’s 2012 album Banga, in which this dynamic is played out in informative ways. I focus on the music of Banga too, and on the different voices utilised by Smith. In the second part of the essay, I consider the canonisation of Smith and her work in light of what I term ‘late chronicles’, a series of documents and events over the past fifteen years that have seen Smith’s work fixed into the rock canon and have provided further context to situate her work and her many cultural reference points. I finish with some further observations on Banga, filtered through the knowledge we have of Smith from the late chronicles that preceded it.

The book is part of the series ‘Profils américains’ – more information available at the PULM website. 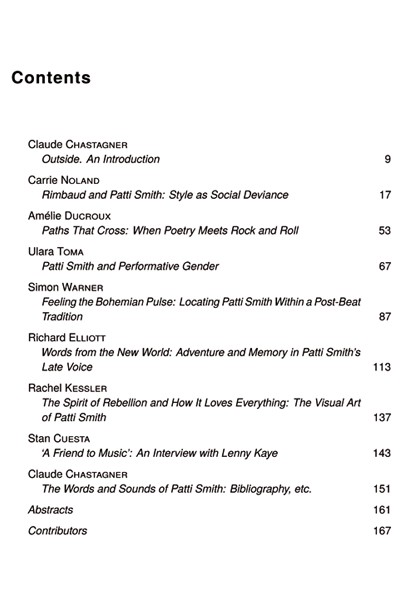